One of the biggest aspects of wrestling fandom is action figure collecting. If you’re not already aware, they aren’t just for kids. The popularity of collecting has soared over the last few years and will only get bigger thanks to the mainstream success of The Major Wrestling Figure Podcast (a show hosted by WWE superstars Zack Ryder & Curt Hawkins) But, this isn’t a new thing. It’s always been there, as has the collectors.

The pioneers of wrestling action figure podcasts (& collecting in general) are the boys behind the Fully Poseable podcast (2 real life brothers, not story line brothers) these two gents, in a lot of people’s opinions, are the godfathers of wrestling action figure collecting. They not only talk about up and coming releases, but also about their collection & decades worth of collecting. It truly is fascinating stuff.

So why am I telling you all this? Well, I have a love/hate relationship with Mattel (the current creators of WWE figures) when they’re good, they’re amazing…but when they’re bad, it’s really bad. So frustrating (how many Rollins, Cena & Styles figures do we need??) especially for UK collectors (we’re always so very far behind)

So what I thought would be interesting would be to take a trip down memory lane and focus on a little line called ‘Ruthless Aggression‘ by Jakks Pacific (probably their most well known & beloved line) to see what their figures looked like 10+ years ago. I’m going to do my best to view it for what it is (& not compare to Mattel) & just enjoy the nostalgia of it all.

So sit back, relax & get ready to say ‘I loved that figure back in the day’…

After COUNTLESS hours of Google image searching, I could not, for love nor money, find a picture of The Animal in that attire. If anyone reading this can, PLEASE let me know!

So I can’t do a comparison as much as I’d like to, but generally speaking I think we can all agree that it does in fact look like big man Dave.

The Ring Rage version of him has an angry, open mouth head scan but I much prefer this more solemn looking face. It gives the figure a more determined and intense kind of feel to it.

The body sculpt is pretty spot on (ripped and veiny) but there are a couple or aspects that let the figure down (for me) and that’s the paint app and printing.

As you can see, and lord knows why, the colour of the Black Ink on his back piece is MUCH lighter than that of his arm. Now, I’m a man of Black & White tattoos. I understand that ink fades over time, but I’m pretty sure they weren’t going for that look. If they were…it makes no sense. Not exactly ‘Toyetic’ is it. 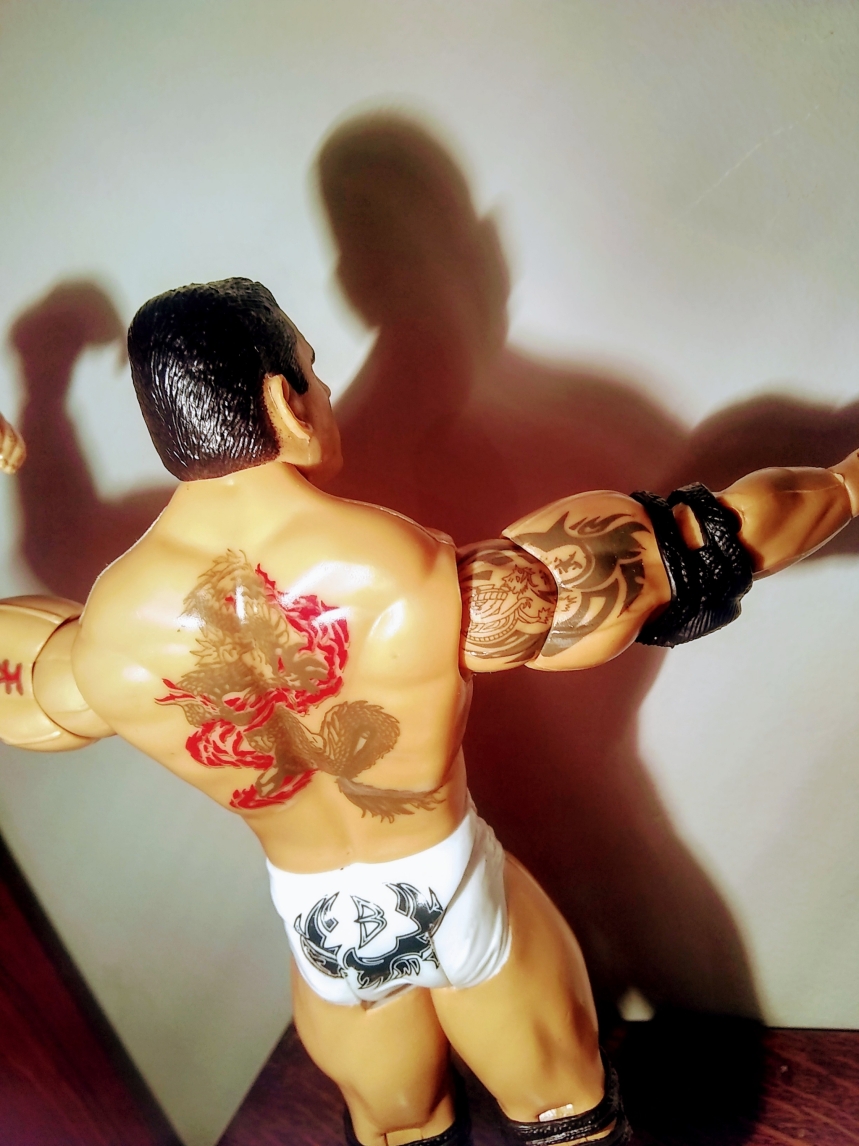 Thankfully it’s on his back, so MOC collectors wont need to worry about seeing it, and even loose figure collectors (like myself) can pose it in a way where it won’t be see. It’s a shame really, but it is what it is. The Animal print on his trunks is also a little faded & off, but again, it’s not a massive issue. At the end of the day, it’s instantly recognisable as Batista, and that’s what counts.

So, would I recommend this figure? For the price, most definitely. This one in particular was just £2.00! (plus P&P) for a MOC figure, that’s amazing. Again, it’s frustrating that the ink isn’t as sharp as it should be, but it’s in his back and out of the way. The head scan is great, the body is perfect it’s a winner of a figure. Especially at that price.