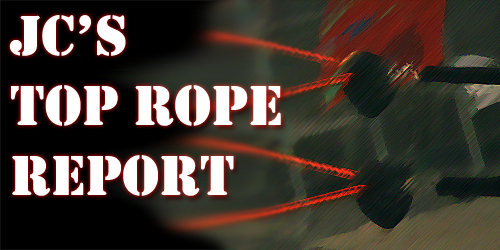 Those of you reading this know that I review RAW for this site. Here is a funny story: Right before the Superstar Shakeup, I thought about changing things up. I had intended on messaging our Smackdown Reviewer, The Chairman, and asking him if he wanted to start writing about RAW and I would start reviewing Smackdown. But I decided to wait until after the Shakeup to see how things worked out.

And I have regretted that decision ever since.

Immediately after the RAW Superstar Shakeup I knew I was in trouble. I saw everyone that came over to RAW from Smackdown. Jinder Mahal? Dolph Ziggler? Bobby Roode? This is what I have to deal with now? I pretty much told myself that I was going to have to start drinking in order to enjoy the show. I had a couple beers this past Monday reviewing RAW, and it still didn’t help. And it didn’t help when I was reviewing Backlash either.

Anyone with a decent eye for pro wrestling knows that RAW is in a lot of trouble right now. You look at the roster from top to bottom and can see it. Of course the problem is that there is still good talent on the show. You have Seth Rollins, Finn Balor, Braun Strowman, Alexa Bliss, Kevin Owens and Sami Zayn. And yeah, even Roman Reigns when booked right is talented. The problem is that the booking on RAW has been terrible ever since the Shakeup. Sure it hasn’t been great in awhile. But these last few weeks have brought out the worst of the booking in the WWE.

Since he is always the main topic of discussion, lets start with Roman Reigns. Reigns continues to talk about being screwed by WWE management. Well guess what Roman, you aren’t Bret Hart. This isn’t going to work. I don’t know who in the WWE thinks that Roman Reigns is going to get over by complaining about upper management, when everyone knows he is the guy in real life. People like to compare Reigns getting booed to that of John Cena back from 2006-2016. It doesn’t compare. To start, Cena was a heel first before becoming a face. That never happened with Reigns. Second, Cena was accepted by the fans as a face before they rejected him. That never happened with Reigns. He was universally hated from the start.

I can remember going all the way back to the start of his singles run what I campaigned for. I said if you want to get this guy over, you need to book him like Goldberg. Don’t let him talk and be a powerhouse in the ring. And that is what he was like while in The Shield. But then the WWE tried to make Reigns like Cena. But Cena is light years better than Reigns on the mic and knows how to work a big match. We’ve now seen four straight Roman Reigns Wrestlemania main events. This year’s was probably the worst yet. Reigns is in desperate need of a heel turn. But instead, he gets to feud with Jinder Mahal. I’m going to laugh when the crowd cheers Jinder over Reigns. And that is mostly because the WWE thinks it will go the opposite direction.

Now lets talk about my main point of disdain with RAW and that is Brock Lesnar. My thoughts on Brock Lesnar are well known. I don’t think he is worth the money he is being paid, and I don’t think he should be Universal Champion. I have a feeling that sentiment is growing among fans. RAW hasn’t had a big storyline going in over a month because the Universal Champion isn’t around to build one. And now we will probably have to wait until SummerSlam to see him again, because he apparently isn’t going to be at Money in the Bank. Why Vince McMahon continues to waste money on Brock Lesnar I’ll never know. His last few matches have been giant stinkers.

How about Bobby Lashley? He debuted on the RAW after Wrestlemania. The fans really didn’t have a reason to care. So they finally gave him a sit down interview this past Monday. And it was probably the worst segment of the show. Why should I care that his sisters were mean to him when he was a kid? Am I suppose to feel bad for him? I don’t feel bad for him one bit.

Then there is Kevin Owens and Sami Zayn. I considered them the two biggest acquisitions on the RAW side after the Shakeup. They have been treated like absolute geeks ever since coming over. They have been jobbed out to the likes of Roman Reigns, Bobby Lashley and Braun Strowman. They were treated as bigger stars when on Smackdown Live. I thought these two would be the top two heels on RAW after the Shakeup. Now they are continuing to tease dissension between them. Sure these two work well fighting each other, but there is still a lot that can be accomplished with these two as a pair. And Sami Zayn is a revelation as a heel.

I’ve gone this far without even talking about the women’s division. Before Wrestlemania I was talking about the Sasha Banks/Bayley program and how I thought it was the best feud in the WWE. Now? That is nowhere near the case. It is almost like the writers have no idea where they want to go with the program. These two were having a brawl backstage over a month ago throwing each other into lockers. Now Bayley is still saving Sasha Banks for some reason. This might win an award for most botched feud of the year when it is done. You also still have Nia Jax hurting people in the ring, and cutting the most forced anti-bullying campaign promo after her win at Backlash. Then there is Ruby Riott, who wins two matches and should get a Title shot. But instead she eats the pin in a Money in the Bank qualifying match.

Now I don’t want to be completely negative here. As I’ve said the last few weeks, Seth Rollins needs to have the rocket strapped to his back and get ready for takeoff. The crowd has flocked to him. They get behind all of his matches. Rollins seems to be at his peak right now in the WWE and I think the WWE needs to strike sooner rather than later. Otherwise, they risk running into something like they currently have with Braun Strowman. While Strowman is still over, he seems to be losing a little bit of steam. Even Matt Hardy and Bray Wyatt have been entertaining so far, and remember I wanted Bray Wyatt gone earlier this year.

So with all that being said, I’m sure a good amount of you are asking: “What would you do to fix RAW?” Well, I can give you three quick bullet points that would make RAW more entertaining in my opinion.

1. Have Seth Rollins Win The Universal Title at Money in the Bank

Brock Lesnar is on a per appearance deal. I’m picking up the phone and telling Lesnar that he is working Money in the Bank, and he is dropping the Title to Seth Rollins. After how much he’s busted his ass this year the guy deserves it. I almost thought Rollins was hinting at a feud with Lesnar this past Monday when he talked about being the only Champion on RAW.

2. I’m A Fan Of Heel Factions, So I’m Forming A New One With Roman Reigns, Dolph Ziggler, Drew McIntyre and Bobby Roode

Ziggler and McIntyre have talked about wanting to make a huge splash in all of their promos on RAW. What better way to do that then to have them join up with Reigns? So how do I get there you ask? After Money in the Bank, Reigns comes out and congratulates Rollins for winning the Title and talks about wanting a shot down the line. They have a tag match in the main event against Ziggler and McIntyre. The bell rings, and Reigns immediately turns around and spears Rollins.

A 3-on-1 beatdown ensues. Out come Finn Balor and Bobby Roode for the save. Then Roode decks Balor. Even Braun Strowman tries to make the save but gets taken out. The show ends with Reigns, Roode, Ziggler and McIntyre standing tall and a new dominant heel faction on RAW is formed. I’d make Kevin Owens and Sami Zayn tweeners in this situation, playing both sides of the aisle for the longest time.

3. Bayley Does The Stretcher Job Thanks To Sasha Banks

Enough dragging of the feet with this program. Bayley loses a Money in the Bank qualifying match this week. The next week on RAW, Sasha and Bayley are in the ring and look to call a truce to their feud, saying it has done more damage to their careers then good. They hug it out, and just when you think everything is good, Sasha sucker punches Bayley. Sasha just lays into Bayley with all she’s got. Sasha grabs a chair and slams it into the back of Bayley multiple times. Sasha then takes a chair and places it around Bayley’s neck. She jumps off the top and on the chair. Now if it was me, I’d go all out and have blood coming out of Bayley’s mouth. And just when you think it is done, as Bayley is getting stretchered out, Sasha pushes the stretcher down and tosses Bayley off the stage. Bayley goes away until the night after the July PPV, where she comes back and starts her program with Sasha.

So what do you think? What ideas do you have that would make RAW better?