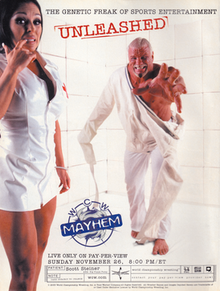 One more jump into WCW before I get into Wrestlemania mode in the coming days. I only have 4 PPVs left in my journey but those are being put on hold for now.

Vince Russo is gone, and WCW is in a downward spiral still. This show only drew 3800 people. Think about that. Back in the day, they could do five times that without hesitation.

Ric Flair is CEO of the company. Booker T is struggling to remain over with the crowd. The only people the crowd even slightly cares about are Goldberg and Scott Steiner. And that is because they’ve turned Steiner into a loose cannon who says and does whatever he wants. I often wonder if people in WCW were ever truly terrified Steiner might actually kill a fan when he argues with them. The young guys are trying their hardest, but most of them just aren’t connecting with the crowd.

Tony Schiavone, Mark Madden and Stevie Ray are on commentary. This should lead to some gems.

Sanders was pretty good on the mic. I could see why they made him the mouth piece of the Natural Born Vanilla Thrillers. Kwee Wee has an alter ego, Angry Allan, when he gets angry. The Thrillers come out early and attack Kwee Wee. They actually do a cool spot where they attack Kwee Wee and toss him into the ring right into a Sanders body slam. Out comes Meng, who attacks all the Thrillers. See, the problem with the Thrillers is that they were made to look like goofs more often than not. Meng has the Tongan Death Grip on Stasiak and Reno and no one can break it until security comes out and gets everyone out of there.

Oh there’s a match going on. Sanders eventually wins after a few minutes of action.

CEO Ric Flair says no one is allowed at ringside in any matches.

Before the match, Noble and Karagias find out they’re both from North Carolina and Karagias once dated Noble’s sister. Everyone brawls on the floor to start. The action gets back to the ring. The action isn’t bad but the crowd just doesn’t care about it. There’s a couple spots where the Jung Dragons have pins but the ref is distracted. Stevie Ray lets it be known he is sick of this ref. It’s that bias ref Scott Armstrong too. He hasn’t developed that awful slow count yet. Everyone hits a move to the outside, which ends in Leia Meow going to the top and hitting a dive on everyone. There’s an awkward double pin where the ref stops counting before Moore kicks out. Three Count ends up winning.

Oh god, this again. This was when Jimmy Hart started challenging radio DJs across the country. Mancow brings out his freak show. Hart says he is injured, then attacks Mancow with the crutch. Mancow hits him with the cast from Hart’s leg for the win. Next.

Reno still comes out wearing his sumo like khaki shorts gear. Vito and Reno brawl before Crowbar is out there. Apparently there is some beef between them involving Vito’s sister. Everyone goes to the back. Reno powerslams Vito through a table. Vito’s sister shows up and asks Reno to stop. Her acting is awful. Crowbar then slams a chair into Reno’s head and gets the win.

The Filthy Animals vs Alex Wright and Kronik

Kronik bails after the 7 minute and 30 second mark. So now it is just Alex Wright vs Kidman and Rey. They end up winning and we move on to the next non-descript match.

Shane Douglas vs The Cat

Douglas calls him and Torrie Wilson the first couple of sports entertainment. Ha, that’s cute. They brawl by the announcers and Madden gets choked by The Cat. When they get back in the ring the announcers spend more time talking about that then the actual match. I can’t tell if the crowd is asleep or they all went to the bathroom. Douglas practically begs the crowd for a reaction. The Cat hits his finisher. Torrie attacks Miss Jones and this gets the biggest reaction of the match. While the ref breaks this up, Douglas gets the chain and hits The Cat. The Cat gets his foot on the rope at two. Miss Jones puts The Cat’s loaded red shoe on and he uses it for the win. Mark Madden makes some racist remarks involving the two.

Someone destroyed all of Jeff Jarrett’s guitars. How will anyone react to his matches now?

There’s an M.I.A. promo but I’m distracted by some woman in the crowd screaming the whole time.

Now there’s a Glacier return promo and Schiavone and Madden shit on it. Madden says the commercials cost more than the guy who played the character. Schiavone wonders if they are trying to scare everyone off with that promo. No Tony, your current product is doing that job.

Bam Bam says since Awesome is in the hospital he wins by forfeit. Flair comes out. He says 10,000 people came to see him wrestle. Schiavone laughs under his breath. I don’t know which part of that statement he is laughing at. Maybe both?

Stevie Ray wonders why there is a table if this isn’t a hardcore match. Remember when it looked like The Wall was going to get a good push? Do they have the crowd on mute or something? They get the table in the ring but Bigelow hits the Greetings from Asbury Park for the win. After the match Bigelow is passed out in the ring, not moving. Problem is no one is buying it and are chanting for tables. Bigelow is stretchered out.

They had this match two weeks ago, before the PPV, and Major Gunns turned on M.I.A. and joined Team Canada. As General Rection comes to the ring, Bam Bam comes off the gurnie and attacks Rection. These two were shown talking earlier in the night. Storm has control of the match early on. The announcers talk about how doctors told Rection to retire due to his multiple concussions. I wish he would’ve listened. They had a big congratulations ceremony for him after he won the US Title and I couldn’t help but laugh at it. Rection gets crotched on the turnbuckle but recovers. He knocks Storm off then hits the moonsault for the win. Poor Lance Storm.

These two have each been in the wrestling business for ten years. They put on the most basic wrestling match you’ve ever seen. This is like first day of wrestling school basics. Jeff Jarrett eventually gets his secret guitar and uses it on Buff for the win. It isn’t even worth describing.

We reset the match and DDP is getting worked over by Stasiak and Palumbo, because you know for a fact Nash ain’t selling for these guys. DDP goes for a pin and pulls down Stasiak’s trunks so we can see his bare ass, because that is something we needed to see. Nash putting in the work in the corner, doing absolutely zero as DDP continues to sell. Nash gets the tag, but Palumbo distracted the ref so he didn’t see it. Nash finally gets the hot tag. He does a minute of work, then hits a Jacknife powerbomb on Stasiak. Sanders pulls the ref out, DDP Diamond Cuts him, then the ref goes back in for the pin. Nash did 10% of the work in the match and still gets the pin.

WCW is still paying Michael Buffer. Amazing. Luger looks like a sixty year old grandma at this point. At this point I’m surprised they are still using Luger too. I guess if you have to pay the guy might as well use him. Because you know you aren’t getting your money’s worth.

If you like kicks and punches, the first five minutes of this match are for you. Goldberg goes for a Spear but Luger pulls the ref in front of him. Goldberg still hits the Jackhammer for the win when another ref comes in. What the hell was the point of the ref bump?

So there is a straight jacket above the ring. If you get it you can put your opponent in it, but you don’t win the match. Steiner attacks Booker before Buffer finishes. But Buffer still finishes the intro like a pro. For some reason Midajah is allowed in the cage as well. This is essentially a mini Hell In A Cell. Steiner slows the match down after some early Booker offense. He yells at the ref every chance he gets. It isn’t as bad as the Roman Reigns situation right now, but this is a situation where WCW wants you to cheer Booker but the crowd is more behind Steiner. Steiner grabs the straight jacket but Booker drops him with an electric chair drop. Booker tries putting the straight jacket on Steiner and fails at it. Booker eventually gets it on then crowns Steiner with a chair shot. Steiner rips off the straight jacket. He clotheslines Booker then applies the Steiner Recliner but Booker gets to the ropes. Booker then drops Steiner on the ropes. Booker hits a Book End but Steiner kicks out. Booker hits the Ax Kick. But while he goes for the Spinarooni Steiner grabs a chair and hits Booker with it. He hits a full nelson slam and then applies the Steiner recliner. Booker passes out and the ref calls the match.

After the match, Steiner obliterates Booker’s knee with a chair to write him off.

Well, it wasn’t worse than Halloween Havoc but it still was completely dull and pointless. It looks like pretty much no one cares at this point. The wrestling is average to subpar to awful at best. Nothing stands out. It is about as lifeless a product you could ask for. Scott Steiner is the only person anyone in the crowd cares about. At this point, his wrestling isn’t where it used to be. Imagine if this crazy Steiner could still wrestle as good as he did in the early 90s. I was done with WCW long before this back in the day. And you can tell why it lost so many people over the span of a year.