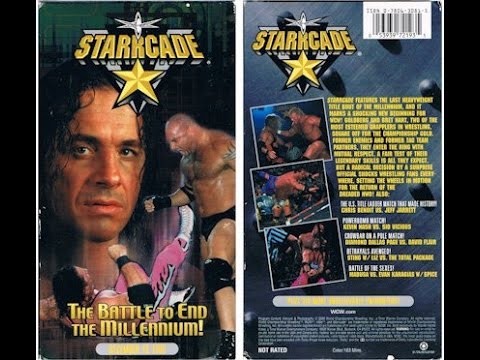 We are right in the heart of Russo Land in WCW. This show would be one of the nails in the coffin for Russo’s first run in the Company. The buyrate was the worst in Starrcade’s history. And how can you blame people for not buying this? They butchered the build to what should have been a dream match between Bret Hart and Goldberg. Every other storyline written for the show was awful. I couldn’t tell you one match I’m actually looking forward to. The Nitros leading up to this have all been awful.

Scott Hudson is on the commentary team and is already shown to be a liar by calling this the best Starrcade match card of all time. The story here is Disco Inferno owed a lot of money to Tony Marinara, so he brought in Johnny the Bull and Big Vito to collect. But you see, they are dumb Italian mobsters and screwed up every time they tried to get the money. So now they are wrestling in a match.

There are about 50 empty seats in the section directly opposite the hard camera. I thought Russo sold out shows in WCW? The ref for some reason turns away and lets Big Vito land a cheap shot then a double team. There was literally no reason for the ref to turn away there. Vito and Bull hit a double hip toss into a double slam which looked good, despite them almost dropping Disco on the transfer. Lash Leroux gets the hot tag and I’ve yet to see what anyone saw in him. He spits at Johnny the Bull then delivers an awkward forearm. Disco hits a frog splash but the ref counts like he can’t lift his arm so Big Vito can jump off the top and break up the pin. Disco accidentally hits Lash with the Last Dance, aka the Stunner, and he doesn’t realize it so Vito and Johnny win.

We find out Scott Hall has a knee injury and can’t go. That likely means he didn’t want to job to Chris Benoit. So now Benoit is the United States Champion. Benoit comes out and issues an open challenge to anyone in the locker room for later.

How the hell does Madusa not fall over walking to the ring considering her tits are so obscenly huge. Karagias comes out with former Nitro girl Spice. Madusa hits an awful crossbody. After some moves by Karagias she bridges up from a pin very awkwardly then almost kills Karagias with a powerbomb. Spice then jumps up on the apron and gets Karagias attention. Madusa barely slaps him then Spice hits an awful low blow. Madusa hits an awful German suplex for the win. Can’t trust women right Vince Russo!

Norman Smiley is quite possibly one of the only things I enjoy from the Russo Era. Of course the gimmick is Smiley is hardcore champ but afraid of hardcore matches. And he is terrified of Meng. They go to the back right away and Meng starts throwing trash cans at Norman. They brawl in catering. Brian Knobbs shows up and then Finlay does as well and they beat up Meng with chairs. Finlay walks right past Meng with a pipe to hit him in the back with it. Smiley reappears and pins Meng then runs away. Meng applies the Tongan Death Grip on Nick Patrick after the match.

The Revolution vs Hacksaw Jim Duggan and the Varsity Club

The Revolution now declares itself a soverign nation. They went from being semi-enjoyable to an absolute joke with this shit. Duggan has been a janitor for the last few months because that is hilarious. Duggan’s partners? The Varsity Club. A team from the 80s consisting of Mike Rotunda, Rick Steiner and Kevin Sullivan. But this 1999 and no one knows who they are and it is a giant joke.

Asya is wrestling because Shane Douglas is still hurt so Douglas is on commentary. The heels dominate the whole match until the Varsity Club illegally comes in. And then the Varsity Club turns on Duggan because WHY THE FUCK NOT. And they STILL BEAT UP THE REVOLUTION AS WELL. Duggan loses and now he has to denounce America on Nitro.

If Vampiro wins, he gets five minutes alone with Oklahoma. Oklahoma is Ed Ferrara, who is mocking Jim Ross. Ferrara was universally hated for doing this. The Misfits locked Oklahoma in a shark cage so he couldn’t escape.

Both men keep doing chops so Oklahoma yells “CHOP CHOP CHOP” at an annoying level. This match is playing out like a basic wrestling school match until Williams almost kills Vampiro with a belly-to-belly off the top. Williams shoves the ref away as he hits Vampiro and gets DQ’d.

Oklahoma gets out of the cage and hits a DDT that Vampiro is forced to sell. Oklahoma actually ducks a kick then lands a low blow. I can’t believe Vampiro is being forced to do this. The Misfits finally come in and beat up Oklahoma and Vampiro hits the Nail in the Coffin for the win. So Vampiro needed help to beat Oklahoma.

Creative Control and Curt Hennig vs Booker T and Midnight

Before the match Harlem Heat was interviewed. He’s getting frustrated with Midnight so he tells Booker he doesn’t have his back tonight. So this is a 3-on-2 intergender match to determine the #1 Contenders to the tag titles. So a typical WCW style stupid stipulation.

Those empty seats are still open in the section opposite the hard camera. How did WCW not move people around at this point to fill those? Midnight gets the tag but she gets clobbered by Hennig. What a sad use of Hennig at the end of his career like this as he has Midnight in a headlock. The heels beat down Midnight. Stevie Ray comes out but Booker T tells him to leave. Stevie Ray comes back out and argues with Midnight. Hennig hits Booker T with brass knucks. One of the racist members of Creative Control makes the pin for the win. More awfulness.

Jarrett is here to not draw any dimes yet again. Jarrett jumps Rhodes in the back while he is being interviewed. They brawl to the ring. Rhodes bodyslams Jarrett in a wheelbarrow. Rhodes grabs a cowbell and hits Jarrett with it multiple times. Rhodes goes nuts. He throws powder in the eyes of Jarrett then duct tapes the ref to the ropes for who knows what reason. Curt Hennig comes out and untapes the ref. Hennig breaks up every pin attempt in a very sloppy sequence. They go to the stage. Jarrett jumps off a ladder with a guitar and hits Rhodes to get the win.

Flair jumps DDP with the crowbar before the match. The ref is ready to declare DDP unable to compete but he starts to fight. Flair gets in some offense then BOOM, Diamond Cutter. DDP goes to hit Flair in the junk with the crowbar but the debuting Daffney comes out to prevent it.

Sting vs The Total Package

Two years ago Sting was in arguably the biggest match in Starrcade history. Now he is fighting Lex Luger, I mean the Total Package, for Elizabeth’s contract. Sting gives Liz a special can of mace before the match. Two minutes in, Liz tries to use it. But it has silly string in it. Sting isn’t dumb! Sting hits his trademark offense. Liz comes in with the bat. She clobbers him over the face and chest with it. Luger then stomps Sting’s hand that Liz put inside a chair. Sting is out cold though. Help comes out and the geniuses in WCW decide to carry him out in an awkward position instead of waiting for a backboard. Genius!

You can only win this match with a powerbomb. Sid goes for one early but Nash low blows him. They fight on the outside. A fan tries handing Nash a beer but that fan must have confused Nash with Hall. Back in the ring Nash gets thrown into the referee. Sid barely powerbombs Nash but the ref didn’t see it. Oh good, out comes Jeff Jarrett who hits Sid with a guitar. Nash goes to powerbomb Sid but his back goes out. Nash then CONVINCES THE REFEREE THAT HE POWERBOMBED SID. OH MY GOD YOU CAN’T MAKE THIS SHIT UP. Nash is declared the winner.

Of course Jeff Jarrett would answer this challenge. If you ordered this on PPV, could you have requested a refund for having to sit through two Jeff Jarrett matches? Benoit gets cut above his right eye from the ladder. Benoit recovers and throws Jarrett into the ladder twice. Benoit sets up the ladder but Jarrett pulls him off. Jarrett plants Benoit in the ladder then leg sweeps him backwards to the mat. Benoit recovers and puts Jarrett in the ladder. Benoit tries climbing but Jarrett shakes it, even though it is quite obvious that Benoit is doing most of the work. Both men take turns climbing and getting knocked of the ladder. Jarrett eventually dropkicks the ladder out from under Benoit. Benoit ducks a clothesline and dropkicks Jarrett. He goes to the top of the ladder then hits a diving headbutt off the ladder. Benoit climbs it again and gets the win. Watching that headbutt makes you cringe nowadays.

I would’ve loved to see the build to this match in the story telling hands of anyone but Vince Russo. Goldberg wins the strength battle early on. He knocks down Bret early on and then hits a powerslam. Goldberg applies an ankle lock that Bret tries to turn into a Sharpshooter but Goldberg powers out of it. Bret accidentally throws Goldberg into the ref because you can’t have a WCW main event without a ref bump. And now in the ring Goldberg takes out the ref with a power toss. Goldberg misses a spear and Bret applies a figure four in the post. When this happened to Hogan six months ago DDP was considered a savage. Both men exchange blows in the corner. A third ref gets knocked out and Bret eats the standing side kick from Goldberg that ended his career. Goldberg hits a spear. Out comes Roddy Piper. Bret takes out Goldberg from behind and applies the Sharpshooter as Piper calls for the bell. Piper walks out then hands the Title to Bret. OF COURSE RUSSO HAD TO BOOK MONTREAL IN WCW BECAUSE HE WASN’T RESPONSIBLE FOR IT IN WWE!

There was nothing redeeming about this show. The ladder match was okay but I wouldn’t recommend going out of your way to see it. This show is typical Russo booking: Keep the matches short because he thinks fans don’t have a long enough attention span to enjoy a good match, try to wow everyone with crash and shock style booking. The problem with that is your long term booking suffers. Every match had some kind of screwy finish with interference.