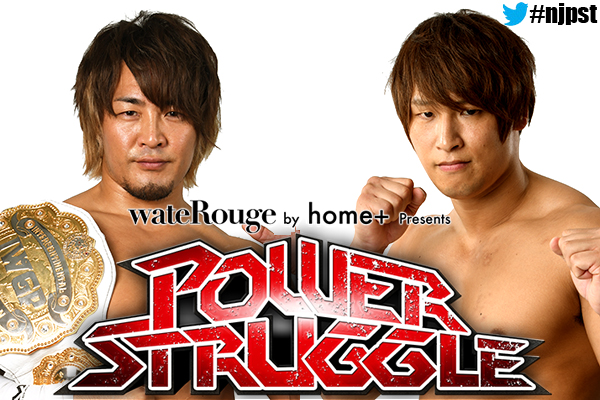 Titan and Dragon Lee vs The Young Bucks

-The Bucks go for a quick Meltzer Driver on Titan, but he head scissors Matt into Nick then Titan and Lee hit duel dives to the outside.

-Nick recovers and hits a Facebuster on Dragon Lee then goes back to the apron and just connects on a moonsault to the outside on Titan.

-Matt holds Titan in the ropes and Nick hits a senton off the top for two. See, that looks better then when people sit in the ropes on their own, waiting for a move to happen like idiots.

-Dragon Lee hurricarranas Nick off the apron. Matt gets thrown to the corner but jumps off the top and DDT’s Dragon Lee on the apron. Titan then takes out both of the Bucks on the outside.

-The Bucks hit a Meltzer Driver on Titan. They then apply a Sharpshooter/Crossface combo, called the “Cease and Desist,” and Titan taps.

-Suzuki-gun jumps the faces before the bell and everyone brawls to the outside.

-ZSJ goes for a Kimura lock but Kawato breaks it up with a springboard dropkick off the top.

-The faces clear the ring and Kushida taps Taka with the Hover Board Lock.

-Cody tries to get Tenzan to kiss the ring, but he refuses. So Chase Owens starts the match but Cody attacks Tenzan from behind.

-The Bullet Club works over Tenzan, with Owens even mocking Tenzan’s shops.

-Owens then mocks Kojima by doing his chops. Kojima isn’t having any of that shit and throws Owens into the corner and chops him.

-Makabe runs right through a double clothesline and takes out Cody and Yujiro. Owens takes him out with an enziguri, but then eats a lariat from Kojima to give the good guys the win.

-Taguchi hits running elbows into the corner on Yoh and Sho to start.

-Yoh and Sho recover and throw ACH and Taguchi into each other then hit dueling swantons to the outside.

-Yoh and Sho go to work on the injured ribs of ACH.

-ACH double stomps Sho and is able to make the tag to Taguchi.

-Taguchi runs to the top and takes out Sho with a crossbody to the outside, going right over a cameraman in the process.

-Sho blocks a Three Amigos attempt but then runs right into an enziguri from Taguchi.

-All four men in the ring. Taguchi and ACH hit double hip attacks on both men. ACH hits a 450 splash on Yoh but Sho breaks up the cover.

-Yoh and Sho take out Taguchi with Roppongi 3k. ACH tries fighting them off but eventually meets the same fate and Yoh and Sho win the Best of Super Juniors Tag Tournament.

-After the match the Young Bucks come out to challenge Ropppongi 3k.

-Sanada pulls down Yoshi-Hashi on the mat and Takahashi dropkicks him.

-LIJ then attack CHAOS on the apron. Naito takes out Okada on the ramp and poses over him after.

-Hashi finally tags in Goto but Sanada comes in and uses his quickness to take out Goto.

-Okada and Naito tag in and the Wrestle Kingdom main event opponents exchange forearm shots. Okada gets the better of Naito to start.

-Both men attempt their finishers but they are blocked. Okada hits a neckbreaker after blocking a springboard DDT.

-Everyone gets a move in at the end. Okada tombstones Naito then hits the Rainmaker on Bushi for the win.

-Yano attacks Suzuki before the match and before he is attached to the rope.

-Suzuki holds the hand of Yano so the ref can tape the rope to Yano’s arm.

-They go to the outside and brawl up the ramp. Yano keeps trying to run but Suzuki keeps pulling him back with the rope.

-Suzuki wraps the rope around Yano’s neck and lands shots to the face of Yano.

-Back in the ring, Suzuki then tosses Yano over the ropes and chokes him.

-Desperado and Kanamaro beat up Yano but Goto jumps the barricade and takes them out.

-Yano rakes the eyes of Suzuki and takes off the turnbuckle pad. Yano pulls Suzuki down by his hair then throws Suzuki into the exposed turnbuckle.

-Yano has Suzuki tied up but Iizuka comes out and distracts Yano.

-Suzuki grabs a chair. The ref recovers and takes the chair but is shoved to the side. Yano grabs the chair and hits Suzuki with it then a powerbomb but Taichi comes out and breaks up the pin.

-Yano hits a low blow and gets a two count.

-Suzuki pulls Yano into the exposed corner. He dropkicks Yano then chokes him out and finishes it with the Gotch piledriver.

-They go to the outside early. Ospreay goes for a move off the railing but Scrull dropkicks it and Ospreay falls onto the railing.

-Scrull starts to work over the left arm of Ospreay. But Ospreay is able to catch Scrull with a dropkick to the legs.

-Near falls from both men. Scrull fakes a superkick then hits a kick to the gut. Ospreay recovers and hits a one man Spanish Fly.

-They exchange slaps and shit talking. Scrull chops Ospreay in the neck but Ospreay moves out of the way of a charge and hits a kick to the face in the corner.

-Scrull moves out of the way of a standing moonsault over the top then hits a DDT on the mat.

-Ospreay catches Scrull with his own superkick then a chop to the back of the head.

-Ospreay goes for a Shooting Star Press but Scrull gets his knees up.

-Scrull goes after the fingers of Ospreay, then hits a flipping DDT for two.

-Scrull applies the Crossface Chicken Wing. Ospreay breaks it by putting Scrull over the ropes. He then hits a Shooting Star Press on Scrull.

-Near fall exchange at the end. Scrull rolls up Ospreay for the pin and gets the win.

-Beretta hits a suicide dive through the ropes. The Bucks distract Beretta and Omega slams Beretta into the barricade.

-Omega pulls a table out and suplexes Beretta onto the metal railing of the table. Omega then double stomps Beretta through the table.

-Omega continues to dominate in the ring. But he gets a little cocky and Beretta gets his knees up when Oemga goes for a second rope moonsault.

-Beretta sits Omega in the ropes then slides to him and German suplexes him off the ropes.

-Beretta goes for a piledriver on the apron but Omega counters and backdrops him.

-Beretta crotches Omega on the apron. Beretta mounts him but Omega drops him face first on the corner.

-Omega goes to the top. Beretta runs up and hits a top rope German. Omega juuusssttt was able to avoid landing on his head when he flipped.

-Omega hits three snap dragon suplexes. Beretta has nothing left as he spits in Kenny’s face. Omega hits the V-trigger and a powerbomb but Beretta kicks out.

-Omega hits another snap dragon suplex but Beretta is able to counter and hit a clothesline.

-Omega hits a V-trigger. He goes for a second but Beretta ducks and hits a Dude Buster for two.

-They exchange near falls. Beretta goes for a crucifix pin but gets two. Omega recovers and hits the One Winged Angel for the win.

-Kenny Omega waits for his next challenger after the match. No one answers. As Omega is about to leave, the lights go out and a video plays. CHRIS JERICHO APPEARS ON THE SCREEN. Jericho challenges Omega at Wrestle Kingdom. Jericho says he is the Best in the World, the Alpha of the Business. Omega accepts.

-They exchange mat work early on. Ibushi dropkicks Tanahashi, sending him to the floor. Tanahashi moves then charges at Ibushi and dropkicks his knee on the apron.

-Tanahashi starts to work over the knee of Ibushi.

-Ibushi misses a swinging kick and goes for a standing moonsault but Ibushi sells the knee when he lands on it.

-Ibushi jumps out of the way of a dropkick to the knees then double stomps Tanahashi. He sends Tanahashi to the outside and hits the Golden Triangle moonsault.

-Tanahashi dropkicks Ibushi’s bad leg getting back into the ring then dragon screw leg whips it in the ropes.

-Tanahashi hits High Fly Flow on the outside.

-Tanahashi hits a Slingblade then goes to the top. But Ibushi catches him with a flip kick.

-Ibushi goes for a hurricarrana off the top. Tanahashi’s leg got caught in the ropes and he just gets out in time to finish off the move.

-Ibushi spear throws Tanahashi into the ropes then hits the dead lift German suplex for two.

-They exchange slaps to the face. Ibushi gets Tanahashi down in the corner and lands more slaps and kicks as he ignores Red Shoes warnings.

-Tanahashi moves out of the way of a knee. He hits a slingblade then a dragon suplex. He then hits two High Fly Flows for the win.

-After the match they do the Switchblade reveal, which turns out to be Jay White. He challenges Tanahashi for the IC Title at Wrestle Kingdom. White attacks him.

-Obviously the big news coming out of this show is Chris Jericho. I’ll be interested to see how this came came about, especially if you assume Jericho is still under some kind of WWE Contract.

The show was fine overall. I was actually a little let down by Ospreay/Scrull. Tanahashi/Ibushi was very good. Wrestle Kingdom is looking really great at the moment.