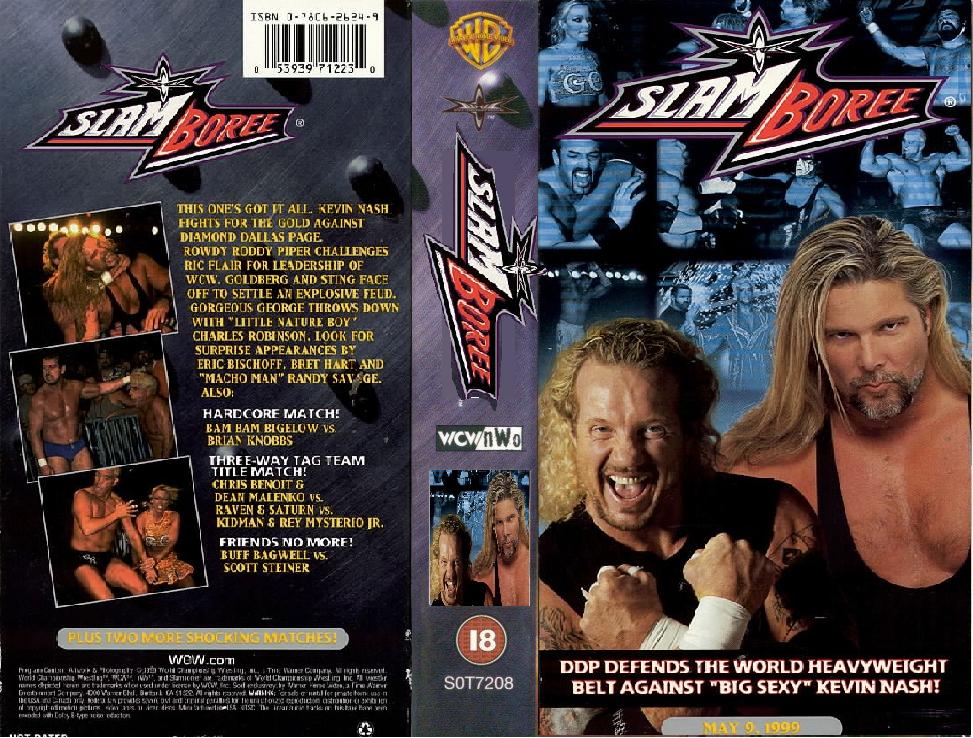 If you follow me on Twitter, you know that I’ve been re-watching WCW in order on the WWE Network. I’m currently in May 1999 of WCW, and my god is it awful. You think 2000 is bad? This may be worse. Now of course I may be changing my tune when it gets to WCW in 2000 but this stuff is just crap.

So now I’m on to Slamboree 1999. Normally HTC writer Tim watches bad wrestling and writes about it, but I’m going to do that today because I feel like I need to vent out my frustration while watching this show.

-Well, best to get the probably only good match on the show out of the way early right?

-Mysterio has been over since losing the mask in a match to Kevin Nash, because Nash obviously needed to do that. Kidman’s been over for awhile now. Raven and Saturn are over too. Benoit and Malenko turned heel at some point. When I don’t remember. But these are six of WCW’s best workers. So they have to be thrown together into one match.

-Mike Tenay talks about Rey not being able to rely on Kidman recently. Because WCW is all about swerves!

-Saturn belly-to-bellys Kidman over the top to the outside because he wants to add half a star to the match.

-By the time WCW realized they needed to mix these six guys with main eventers it was too late.

-There is a sign in the crowd that uses “your” instead of “you’re.” That’s annoying.

-It is a shame to watch these guys bust their asses knowing nothing will result from it.

-Unlike tag triple threats or fatal four ways of today, one member of the team is in the ring at all times. I like that.

-Kidman and Rey get a chance to shine with some high flying moves, which includes Kidman tossing Rey over his shoulders onto Benoit on the top, then Rey hitting a hurricarrana. They try the same thing with Saturn but Saturn powerbombs Rey instead.

-Of course this has to be ruined with something stupid: The ref looks RIGHT AT ARN ANDERSON, then looks away and allows Arn to hit a Spinebuster.

-Here comes a man in a Sting match, with the ref yelling at no one on the outside. The man, who turns out to be Kanyon, knocks Kidman off the top. Raven hits the Evenflow on Kidman and gets the pin, even though Malenko had a Cloverleaf on Saturn before hand. Good match, shitty finish.

-Oh good here comes Stevie Ray, Vincent and Horace Hogan. It is the nWo B-team. I can’t think of a less intimidating trio.

-The nWo theme gets ZERO reaction. That is hard to think of knowing how over they were even a year ago.

-Konnan cuts the same promo he does every week. I don’t get how he ever got over.

-Stevie Ray’ tights look like he borrowed them from Virgil.

-Stevie Ray stops Konnan and tries to clothesline him three times before he goes down in a shitty spot.

-Three minutes in and it is Hold, Rest Hold, Stevie Ray taunts. Repeat.

-This match is moving as fast as my cat is right now, and my cat is dead.

-MORE REF DISTRACTIONS. Rey Mysterio tries to make the  save. The ref gets distracted by Vincent and Horace so Rey goes to the top. Stevie Ray looks RIGHT AT HIM. He waits and Rey dives on his shoulders, and Konnan slowly rolls him up and gets the win.

-DDP is seen talking to Bam Bam Bigelow backstage. Maybe DDP is asking him if he was back in ECW at the moment?

-Imagine being Bam Bam Bigelow. You sign with WCW in late 1998 and start by going after Goldberg. Six months later and you are fighting Brian Knobbs. Did he think WCW’s politics were worse than the WWF? I almost wonder if he would rather go back to ECW and not get paid by Paul Heyman.

-Schiavone and Heenan tell Tenay to shut up during all the trash can to the head spots. Poor Tenay.

-It is tough for me to try and take this match as brutal when the announcers are laughing at everything.

-Now the fight spills to the merchandise stand. Knobbs climbs the railing and goes to jump on Bigelow but Bigelow falls off and pulls the table so Knobbs pretty much hits nothing on the way down. Bigelow then suplexes Knobbs through the table for the win.

-This match is happening because Rick doesn’t believe Booker T when he says that he has no idea why Stevie Ray is helping him. You can’t fault Rick, he was dumb enough to fall for the tricks of Buff Bagwell twice.

-Almost five minutes in and the crowd just doesn’t care. Mostly because WCW hasn’t given the fans a reason to get behind either guy.

-Nick Patrick is admonishing Rick Steiner for using closed fists. Probably the only good thing he’s ever done as ref.

-Booker T mounts a comeback, but Scott Steiner runs in.

-Guess what? With the ref not looking, Scott trips Booker T and Rick hits the Steiner Bulldog for the win. So now does Rick know Scott helped him???

-The only good thing that came out of this build was when Charles Robinson said “I’m going to buy you a pack of gum, because we all know a bimbo can’t walk and chew gum at the same time!”

-Madusa is so plastic at this point I can’t believe she is still around today.

-I think Charles Robinson just said he was going to rape Gorgeous George after the match: “I’m going to put you in the Figure Four, then wipe the dust off and take you to space mountain.” Sounds like it.

-Ric’s muscle woman is called Asya. You couldn’t have made it a little more different than Chyna?

-Robinson tries to grab a chair. But Miss Madness 99, Molly Holly, grabs it. So Robinson bodyslams her.

-Gorgeous George is actually selling the knee so give her credit for that.

-Ref distraction. Savage decks Robinson and Flair. George hits the elbow drop for the win. And she is still selling the leg like a pro. Full disclosure: That could have been a lot worse but it wasn’t as bad as I was expecting.

-How is this not a Steroids on a Pole Match?

-Buff attacks Scott before Scott can give a great unscripted promo. Bastard.

-Its okay. They go to the outside and Scott yells at some fans. Often times the most entertaining parts of Nitro.

-A chair gets involved. And the ref gets pulled in between both men.

-Here comes Rick Steiner. He grabs the chair and hits Buff with it. Scott applies the Steiner Recliner and Buff is out.

-Logically, Rick shouldn’t help Buff after Buff turned on him so many times.

-Flair fired Piper. But they are still fighting here. And if Piper wins he gets to control WCW. Everyone got that?

-Charles Robinson comes in to ref the match and Flair fires Johnny Boone.

-Tenay hypes the “Ross Report” on the WCW Hotline. For some guy they employ named Ross something.

-Three minutes in and nothing but chops and slaps. Expected for a match between guys past their primes.

-Arn Anderson has a “WCW Crew” shirt on. Could they not have gotten him a shirt that doesn’t say that?

-Robinson misses both Piper pin attempts and doesn’t hear Flair give up in the Figure Four.

-Again, my dead cat is still moving faster than this match too. RIP Sammy by the way.

-Piper takes out Arn, Asya and Robinson. But Flair hits Piper with a foreign object and wins. Thank god that is over.

-BUT WAIT! Eric Bischoff comes out. He calls Ric Flair a piece of garbage and declares Piper the winner. But doesn’t Bischoff kayfabe have no power? Piper fires Flair. And this is awful.

-This match should’ve been a HUGE main event for WCW. But instead, in WCW fashion, they threw it away in a two week build on this show.

-Sting goes to hook the arm in the air for an armdrag early but botches it. We are off to a good start.

-Not a bad match so far. But it is just lacking the big fight feel it should have with these two involved and nothing on the line.

-Sting hits two splashes in the corner. He goes for a third but Goldberg catches him and basically bear hugs him down but the announcers call it a Spear.

-Here comes Bret Hart. He crowns Goldberg with a chair shot and the ref throws it out. And now the Steiners take out both men.

-Seriously, how could anyone pay for a WCW PPV at this point knowing you would get a bull shit finish in every match?

-Michael Buffer calls this one of the greatest nights of action in WCW history. HAHAHAHAHA

-DDP’s first title win should’ve come a year earlier. But it came to little fan fare and a heel turn after.

-The crowd is distracted by something early on. Obviously more entertaining than the match.

-Page is working over the legs of Nash. Nash is selling by just laying there.

-The crowd is again distracted by something in the crowd. Goes to show you how entertaining this match is.

-Savage comes in and takes out Nash after he hits a powerbomb. So Savage is a heel here, but a face against Flair.

-Eric Bischoff comes out and restarts the match. DOESN’T HE NOT HAVE ANY POWER???

-Nash boots a chair into DDP’s face (it is also now No DQ) and Page goes up for the ride and looks at the lights because Big Kev has the book now.

My god what an awful show. The worst WCW show of the year so far. And Uncensored sucked. When Robinson/George is the second most entertaining match on the show you know it is bad. Every finish outside the hardcore match had either a ref bump, a ref distraction or interference. One of WCW’s many problems is that no one ever went over clean outside of Goldberg’s undefeated streak. One day, I will write and podcast about this. Hopefully that time is soon.