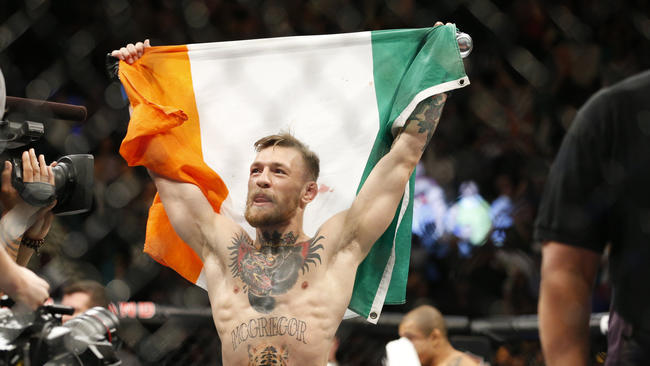 -Many wrestlers and fans continue to respond to Conor McGregor’s comments about the WWE. McGregor called the WWE guys a bunch of “messed up pussies” and accused pretty much the entire roster of taking steroids. McGregor issued somewhat of an apology later:

I didn't mean no disrespect to the @wwe fans. What I meant to say was that I'd slap the head off your entire roster. And twice on Sunday's.

That seemed to anger even more people. Ric Flair in particular had some good responses:

Coming from a guy who built a career copying my persona, I expected the type of class we get from Ronda or Anderson. pic.twitter.com/iVoC0Xva5g

After Diaz finishes you again, I dare you to try guys like Dolph, Brock, or Fit.

Oh you're welcome for your gimmick pic.twitter.com/0qziVjlMav

There are other responses out there from the likes of Roman Reigns, AJ Styles and Big E. McGregor is a character. His job is to sell tickets and get people talking. He is essentially a wrestling heel. Many people are going after the wrestlers for taking everything so seriously, and accusing them of “getting worked.” But if McGregor is working the boys, my question is why? Wrestling fans aren’t going to suddenly go buy McGregor’s fight in a few weeks because of this. And as of now, McGregor isn’t working any WWE shows. So wrestlers do have a right to get angry. To me, this comes off as nothing more than McGregor being the prick that he is. Yes, sorry I’m not a fan of the guy. I’m sure McGregor has no intention of working WWE shows. And if he does, I’m not sure how receptive the folks in the WWE locker room will be to him.

Prowrestlingsheet.com is reporting that Joey Styles was recently released from the WWE. Most people will remember Styles as the Voice of ECW. More recently, Styles has been in charge of WWE.com. The last known thing Styles did of note was a Facebook Q&A. Styles talking about various topics in the interview. He mentioned not being a fan of the 3 person announce teams and also disliking the name for the WWE Universal Championship. The WWE has not officially announced his release yet.

The WWE announced on their website today that Ryback is now officially gone from the company. No surprise here. Ryback was not happy with his spot in the company and made it known in an online posting. You wonder if he regrets that now with the brand split taking place.

Error: Twitter did not respond. Please wait a few minutes and refresh this page.